Most Beautiful Places in Pokhara That are Worth Visiting[2019]

Pokhara is indeed one of the beautiful city in Nepal due to its rich natural beauty. It is the major tourism hub spot. Among the most popular city of Nepal, Pokhara presents the real beauty of Nepal with the view of the Himalayas range, beautiful lakes, and a lot more beautiful places. Even more, it is widely popular for trekking, boating, rafting and extreme sports like bungee jump, canoeing, and paragliding.

Pokhara is just around 200 km away from Kathmandu valley. Kathmandu, on the other hand, is a culturally rich city with a wide range of cultural heritage and religious places. Meanwhile, for international tourist from the airport you can fly directly to Pokhara. The travel time is approximately 40 minutes. Similarly, you can travel via bus too. Since buses are easily available for day/night. It can take around 7 hours to reach from Kathmandu. After getting there you can feel the great beauty of the city. You can stay around the best available accommodation near Pokhara city as per your choice.

Pokhara is renowned for the “city of seven lakes”. Seven of stunningly beautiful lake namely Dipang Lake, Begnas Lake, Rupa Lake, Maidi Lake, Khaste Lake, Gunde Lake, and the most popular Phewa Lake resides at the heart of the city. Approximately across the globe, more than 7,00,000 tourists visit Pokhara annually.

As the monsoon disappears in September, October and November are two favorite months to visit. During the month it can be a lot easier for trekkers due to its dryness. Meanwhile, it offers a clear view of Himalayan ranges and the beauty of Pokhara. As most rainfall place in Nepal, Pokhara receives heavy rainfall from May to August. The true beauty of  Pokhara can’t be felt with a few times. Beautiful places, beautiful lakes, a great view of Himalayan range and familiar people are some of the essences of the city. Once is not enough.

Here we came across the list of highly rated places you shouldn't miss when you are staying at Pokhara:

It is one of the major tourist attractions spots in Pokhara. This marvelous waterfall cascades down at the south side of the Phewa Lake in Pokhara. It is in the gorge of the Seti River. It is an area known for its beauty and tranquility and the legend of Devi’s fall adds a touch of mystery to this site.

You can visit this site at any time as it is open on days of the week. The best time to visit this site is during monsoon season as the volume of the water increased significantly. There are tons of great accommodation and hotels nearby.

As the name suggests in the Nepali version “Chamero”, a bat cave is way more popular across the country. Whenever people travel around the city, the majority of people have visited the cave. There is the habitats of the bats over the cave's wall and the ceilings.

Image: Inside the view of Bat Cave, Pokhara, Nepal

Apart from its attraction, it is also rich in greenery as the surroundings of the cave is covered by the forest. After having a trek to a Mahendra cave and bat cave you can get adjust around the place nearby. Here is the possible nearest hotel to the bat cave.

Located in the southeast of the Pokhara valley. The lake is the third largest lake of Nepal and surrounded by a great scenic view of Himalayas and hills. With its freshness of the water, boating, fishing, and swimming are some of the major activities to get into, the bonus being surrounding green mountains. After getting back from lake check into the highly rated Begnas Lake Front Guest House with lovely views of lake and Himalayas. 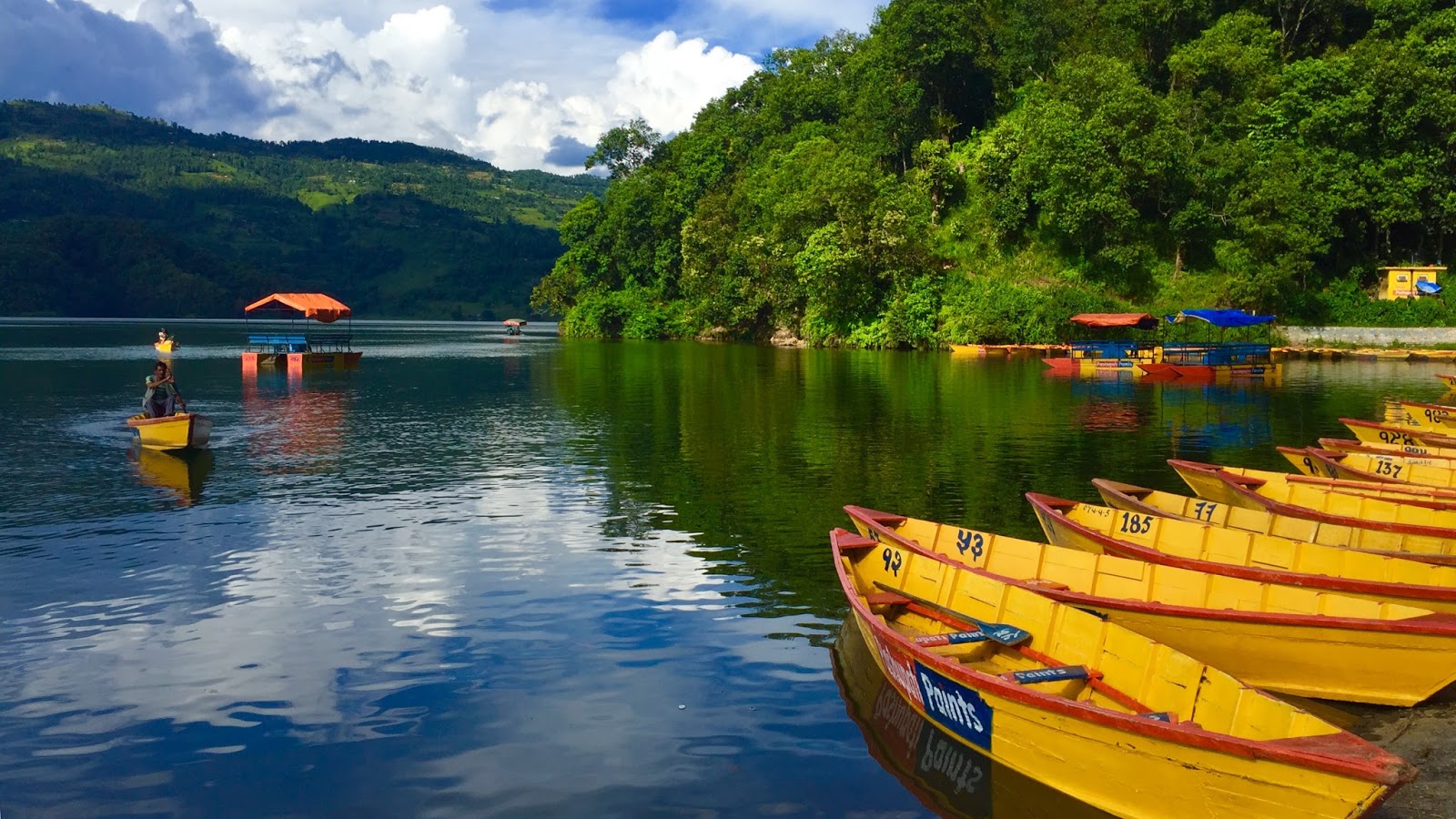 One of the most visited spots in Nepal. Phewa lake has its own significance. The second largest lake in the country, it is extremely famous due to its immaculate environment and great scenic view. The Barahi Temple which is based on an island in the lake, and the mirror-like reflections of the Annapurna, Dhaulagiri, and Machhapuchhre in its waters. Stay at the delightful hotels with great accommodation in the nearby Phewa lake.

Image: Phewa Lake with an amazing view of Annapurna Range

Situated at the north side of Pokhara city, Sarangkot is famous for its scenic mountain view and paragliding. Even more, a moment of sunrise and sunset view can be visually appealing for anyone who wants to freshen their day. The village is located on Sarangkot mountain at an altitude of 1600m and is renowned for its panoramic Himalayan views of Dhaulagiri, Annapurna, and Manaslu as well as Pokhara city and Phewa lake at the bottom. In recent years, Sarangkot has become a hotspot for paragliding. After having a great time over there you can stay at most possible nearest hotels and accommodation nearby Sarangkot. 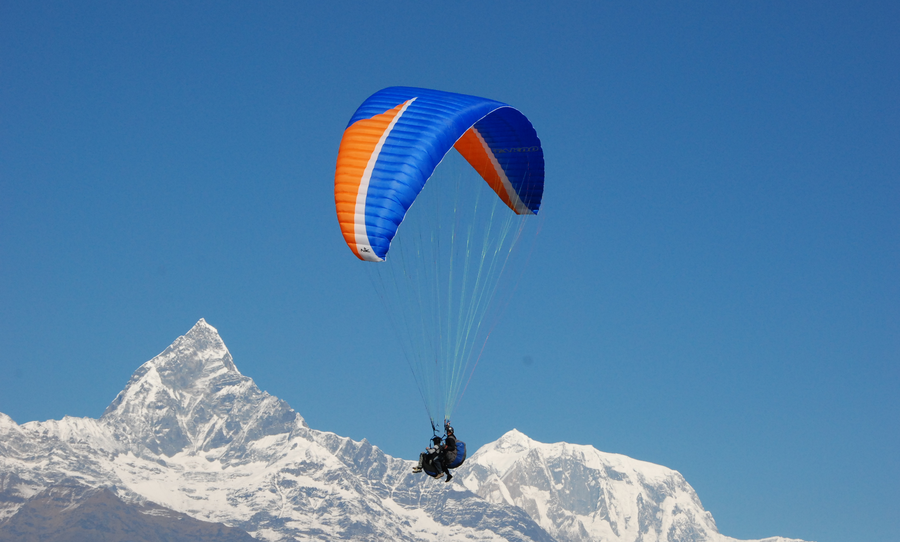 Located at the heart of Pokhara, Shanti stupa is a Buddhist pagoda style monument lies in the Kaski district of Nepal. In English, Shanti Stupa means Peace Pagoda. It was built as a symbol of peace. Situated at the height of 1100 meters on the Anadu Hill, Shanti stupa has become a major attraction for tourist.

Standing at the topmost of Shanti Stupa, you can enjoy the real beauty of nature. Even more from the top of the stupa, you see a spectacular view during sunrise and sunset. It provides a panoramic view of Annapurna range, while Pokhara city and Phewa Lake at the bottom.

Shanti Stupa is a perfect spot for those who want to feel the true beauty of nature while hanging around at Pokhara. It is one of the hidden gems you shouldn’t miss around the city. TripAdvisor has ranked Shanti Stupa as the second top attraction spot of Pokhara. Don't be worried about the hotels and accommodation near the places. Here are the topmost available and highly rated hotels.